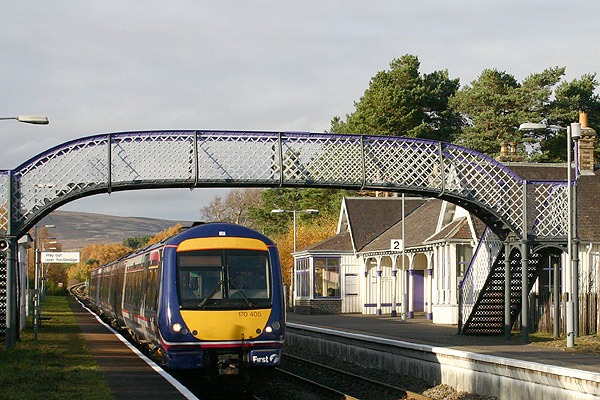 Direct services north to Inverness and south to Edinburgh and Glasgow. See ScotRail for times and timetable or National Rail Carrbridge Departures & Arrivals Board.

Virgin Trains East Coast operate a service between Inverness to London, only the Sunday Southbound train stops at Carrbridge (all stop at Aviemore).

Serco operate the Caledonian Sleeper which only stops at Carrbridge north bound but an earlier train from Carrbridge connects with the southbound sleeper at Aviemore.

Note: Stopping trains normally stop on platform 2 unless north and south bound trains are passing each other. There is no disabled access to platform 1.

Real Time Trains for details of all trains including freight.

April 2010 – More than 100 rail passengers were stranded for more than seven hours when their train hit a snowdrift near Blackmount, between Carrbridge and Slochd, then a rescue train also became stuck. See BBC News article.

February 2010 – On 14 February 2010 the 167 tonne loco ‘James the Engine’ was lifted out of the catch point ditch. Article and photos by Andrew Smith at Meejahor photos.

April 2009 – New PA now operational. PA announces all trains with platform info and can be used to provide delay info and special messages (April 2010: note we have ongoing issue with incorrect platform being announced!).

January 2009 – “Impressive growth’ in rail travel numbers” HITRANS says that the catalyst for the increase was the introduction three years ago of the new Invernet services… But HITRANS also attributes the growth to continuing investment in the rail network and efforts made by local communities to improve their stations.
According to statistics revealed by HITRANS, railway stations at Carrbridge, Lochluichart and Ardgay showed growth of well over 150 per cent from 2004/5 to 2007/8. See The Northern Times article 8 Jan 2009.

January 2009 – A new PA system is being installed at Carrbridge Station. We should soon be hearing announcements of train arrival platforms and any service issues. The access road was also recently tarred, a big improvement on the previous pot-holed gravel track.

July 2006: After extensive work most of the two platforms have been replaced.

In 2007 we joined the Adopt a Station / Gardening at Stations scheme. The first fruits of this has been the installation of ten half whisky barrel tubs on the platforms which we planted up in October. This was funded by First ScotRail with help from The Speyside Heather Centre. Renewable source, peat free compost was used. We are working on pushing for a number of other minor improvements. See Strathspey & Badenoch Herald article Station is bloomin’ superb (note some words mangled in article).

RailScot history of Inverness and Aviemore Direct Railway (Highland Railway) line. See photo of Opening of line, Carrbridge Station,1898 (Carrbridge opened with service to Aviemore six years before line to Inverness was completed); original station plan; and plan of Dulnain Viaduct which was completed in August 1862.

Carrbridge Rail Disaster of 18 June 1914 when the train was derailed at Baddengorm Burn just north of Carrbridge due to the bridge sagging under the train after an older road bridge collapsed further upstream causing heavy flooding and debris. When the Driver walked back,
the viaduct suddenly collapsed under three of the carrages. Two carrages were up-ended and one carrage was washed downstream. The train was almost empty. Five passengers died “most likelycrushed rather then drowned” Rail Safety & Standards Board. See Am Baile for more photos and info. Also see more info.

The Strathspey Steam Railway is located in the Central Highlands of Scotland, runs from Aviemore to Boat-of-Garten and on to Broomhill. The railway co plan to reinstate the line past Broom Hill to Grantown on Spey by about 2009. This line was part of the 1863 Inverness and Perth Junction Railway.