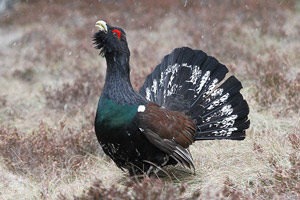 The surrounding area is a veritable garden of eden for bird and wildlife watchers. The Local pine forests are home to crossbills, crested tits, red squirrels mountain hares and deer. While nearby areas provide summer habitats for snipe, greenshanks, oyster catchers, lapwings and too many more to mention. You have a good chance of seeing golden eagles, ospreys or peregrine falcons too.

A taster of the flowers in Carrbridge

In spring, alongside the river there is a beautiful display of white plumes of flowers on the bird cherry and at ground level, the greater wood rush is in flower. This has thick strapping leaves, a little like bluebells. In Ellen Wood, there are carpets of wood anemones, wood sorrel and woodruff, followed a little later by chickweed wintergreen’s small white flowers.

Early summer in Glencharnoch Wood provides us with an exciting orchid, lesser twayblade. This is very difficult to spot as it is so small and grows amongst the heather and sphagnum moss in areas that have held Ancient Woodland. Other plants in the woods flowering include common cow wheat, a small yellow flower and milkwort, a small blue flower. Both intermediate and common wintergreen can be seen by the railway walk. By the river you can see greater stitchwort, common dog violets, lupins, hogweed, common chickweed and common mouse-ear in good numbers along the bank.

In mid summer, the creeping lady’s cresses appear. These are a small orchid with white flowers up the stem. You can find these in Glencharnoch and Ellen Woods amongst the heather, cowberry and bilberry (blaeberry). Blaeberry are the deciduous bushes with small black edible berries, cowberry are evergreen with small red berries. Also present in the woods are tormentil, heath bedstraw, bell heather, cross leaved heather, bird foot trefoil and wavy field grass.

Alongside the river walk, there is a multitude of plants including broom, meadow thistles, lady’s mantle, yarrow, field scabious, tufted vetch, lousewort, red clover and common valerian. Fox and cubs (orange and yellow flower) and harebells are plentiful in the verges around Carrbridge.

We are lucky to have a large colony of the endangered heath cudwed, this is a fairly unimpressive plant but it’s presence in Britain is severely declining. You can see this from the footpath from Station Road towards Carrbridge Pony Trekking Centre, on the right in the small wooden fenced triangular field. The plant has silver leaves (similar to rosemary) and tiny yellow/black flowers.

Please remember that although it is illegal to pick wild flowers, you can always take photographs to record their beauty.

The Carrbridge area is blessed with a fine mix of habitat which holds all the Speyside specialities. Winter sees Redwing and Fieldfare in the woodlands and this can be a very good time to catch up with Crested Tit as many birds come into the gardens in the village to the numerous bird feeders. Also listen out for Crossbills flying over, with both Common and Scottish being present. The woods around the village are important for Capercaillie and can be seen from many of the recognised walks, please please stick to the paths and keep dogs on leads as this species is very prone to disturbance and we need to help them as much as possible!! This is also a good time of year to search for Black Grouse with several local areas holding good numbers.

The spring sees large numbers of migrants arriving back in the area and in some years winter visitors such as Redwing stay to breed. Listen out for Redstart, Tree Pipit and later good numbers of Spotted Flycatcher along with hundreds of Willow Warbler; a Ring Ouzel has held territory in the village in the past! Cuckoo call from some of the more open woodland and it is always worth scanning the sky around the village as both White-tailed Eagle and Golden Eagle can occasionally be seen. The Strath has a build up of breeding waders with Lapwing, Oystercatcher, Snipe, Curlew and Redshank all present and smaller numbers of Golden Plover in stunning breeding plumage in several of the local fields especially Dalnaheitnech

The summer sees the woodlands quieten down as most species are busy feeding young but late summer sees a flush of young birds in the woods with flocks of young Crested Tit along with huge numbers of Coal Tit and young Redstart, commoner birds include Long Tailed Tit and good numbers of Bullfinch can also be present. The Dulnain is a good site year round for Dipper and in the summer Common Sanpiper and Grey Wagtail can also be seen.

The Autumn sees a build up in Thrush numbers and geese returning to the area round the Carr Road which can also hold large finch flocks. Enjoy the birds in our stunning area but always adhere to the BTO and countryside code on watching wildlife with as little disturbance as possible!